Восточно-Европейский Экспресс » Our blog » Blog » How many countries in Europe, based on geographical indicators?

How many countries in Europe, based on geographical indicators?

An unequivocal answer to the seemingly simple question: “How many countries are in Europe?” Is actually quite difficult for a number of objective reasons. They can be two categories:

Unanimously 44 countries are considered European countries. Opinions about a number of others differ.

How many countries in Europe 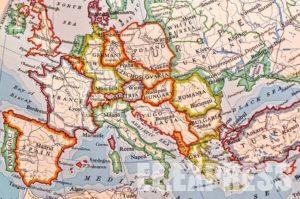 The confusion here comes from the fact that in the understanding of a significant part of people the words” continent “,” mainland “and” part of the world “are synonymous. But if you follow not a purely narrow-minded, but a scientific approach to the interpretation of these terms, then there is a significant difference. The continent and the mainland are geological and geographical concepts, while part of the world has historical and cultural semantics. Therefore, Europe and Asia, forming a single continental space, have a somewhat conventional border that runs along land. This explains the presence of states that are located simultaneously in two parts of the world.

There are five such countries. Of these, only Kazakhstan is not in European associations. And others (Azerbaijan, Armenia, Georgia and Turkey) are members of the Council of Europe. At the same time, Turkey is among the candidates to the EU countries.

But opinions are different depending on the point of view of the author of the classification. Perhaps the only country located simultaneously on two continents, which is unanimously attributed to Europe, is Russia. The historical roots of the state, the capital, the main economic potential and the number of people are all concentrated in the European part of its territory.

Separately, should consider the situation with Cyprus. Geographically, everything is unequivocal here, but it is often not included in the general list for political reasons. The former united state, for more than four decades, has actually been divided into three zones of influence (Cypriot, Turkish, and English). At the same time, the Republic of Cyprus, as a member of the EU, controls only a little more than half of the territory. One third is the Turkish Republic of Northern Cyprus.

And here we come close to another aspect of classification – the political one.

It’s difficult to name the exact number of countries in Europe because of the ambiguous status of individual territories. Among the above-mentioned forty-four countries, we attributed the states that have the status recognized by all international organizations. Their number is valid for today. Social processes taking place in the world lead to changes on the political map of the planet.

Currently, so-called “dependent territories” remain in the European part of the world. Four of them belong to the United Kingdom of Great Britain:

The Aland Islands belong to Finland, Spitsbergen to Norway, and the Faroes are Danish dependent territory.

In addition, there is the concept of “unrecognized” or “partially recognized” states. These include:

Thus, the final answer to the question, so how many countries in Europe are there today, everyone can give only to himself.

Japan Auctions
How to buy on Amazon
Could the yuan oust the dollar from the reserve currency?
Work in Poland: search features
How to find quality products on Aliexpress
Share on your social media page:
Europe