The most expensive emirate of the UAE

Abu Dhabi is the most expensive emirate of the UAE

According to legend, the city was created thanks to a gazelle that led Arab hunters to an oasis of fresh water. As a token of gratitude, the hunters released the animal, and the city was named Abu Dhabi, which translates as “father of the gazelle.”

The capital of the United Arab Emirates is also the richest emirate in the UAE. It is the administrative, financial and transport center of a large oil and gas producing region. You won’t see impressive construction projects like in Dubai. Other entertainments are welcome here: collecting and exhibiting vintage cars, racing on its own Formula 1 tracks, sailing along the Persian Gulf on yachts built with the latest technology.
Therefore, the sights here are such, from the contemplation of which is breathtaking.

What to see in Abu Dhabi 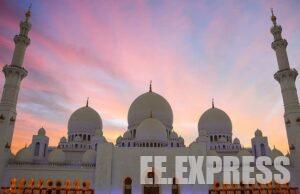 This building is a monument to Sheikh Zayed ibn Sultan Al Nahyan, the man who united the poor Bedouin lands into one state, which became the richest on the planet. The cost of this creation is more than $ 500 million. This is the embodiment of the immense wealth of the Emirates, a sign of faith and is a revived version of the book “1000 and 1 Nights”. In a mosque with an area of ​​more than 22 thousand square meters. m. you can see a lot of things. There are marble prayer halls inlaid with precious stones, and a huge chandelier weighing more than 9 tons, and a handmade carpet with an area of ​​about 6 thousand square meters. m. and much more. Artificial lakes lined with dark tiles are located around the mosque.

Everything in the recreation park is dedicated to this car brand. Watch documentaries about the history of racing, fly over Italy using the simulator, swim on the ocean floor, ride with the breeze at a speed of 200 km / h on the fastest American races. These slides are also unique in that instead of the cockpit, an emulator of the F1 car is mounted. This makes it possible to experience the full range of emotions of professional racers. But that’s not all: rooms where you can see how cars are assembled, the opportunity to take a virtual trip inside the Ferrari engine, and much more.

47 years ago, Sheikh Zayed Al Nahyan decided to build a nature reserve for those rare animals that live in the Arabian Peninsula. In a few years, the island was turned into an oasis: more than 8 million different trees were planted there, the island is inhabited by rare animals and birds, hotels for people coming to the island were built. You can travel around the island on a rented bike. And the underwater world of the island can be explored by diving.

This building, 130 m high, attracts tourists with its rounded shape. It is recognizable by a huge golf ball placed on the roof, and the building itself is trimmed with green glass. It is Abu Dhabi’s most famous architecture and serves as an excellent reference point for those driving. The tower is the symbol of Etisalat, the largest cellular communications company.

It is the island of history of the capital of the UAE. Founded in 1997, the village is one of the most important historical sights of the Emirates. It shows the Bedouin lifestyle, date palm huts and other exhibits. For example: what utensils did the indigenous people use, the development of crafts, the arrangement of the life of the Arabs. The museum exhibits gold jewelry, bronze weapons and other archaeological loot. In a neighboring village, the way of pearl divers is shown.

Even in the process of construction, this 160-meter building was entered in the Guinness Book of Records as a building with an angle of inclination of 18 degrees. A reinforced skeleton and 8,500 corner plates give stability to the building. The building is covered with glass panels in the form of cut diamonds. The building consists of 35 floors, the first 18 are used as office space. The rest are Hyatt Capital Gate Abu Dhabi.

Multimodal freight transportation
3 US states that were bought for cash
Delivery of children's toys from China
Groupage cargo from Italy
Intermodal transport
Share on your social media page:
UAE